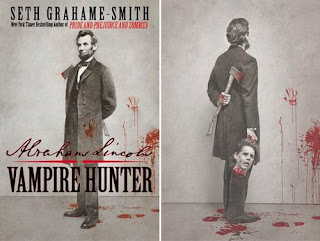 I recently finished Seth Grahame-Smith's Abraham Lincoln: Vampire Hunter--why I ever decided to read it, I'm not sure. Oh, yes, I remember, I thought, hmm, another book which will be in the theater soon, guess I should read that in case anyone asks me about it. (I am beginning to feel that at least one of the books I am reading at any given point is already a movie, coming to theaters shortly, or is being transformed from book to screenplay as you read it.)

I gave Grahame-Smith a try even after not being able to make it through his Pride and Prejudice and Zombies (for the record, I cheated, I tried to do the graphic novel).  I thought that I hated P&P&Z so much because it besmirched my beloved Austen, but reading Abraham Lincoln made me realize that I don't like how contrived Grahame-Smith's stories feels...I know, I know. You KNOW that going into it. You know that Abraham Lincoln wasn't REALLY a vampire hunter and that the Bennet sisters (P&P&Z) weren't really trained in zombie combat...but be clever for Heaven's sake! Don't make every bad guy a vampire or in league with vampires! I literally rolled my eyes and shouted, "AWWW! C'MON!" when Edgar Allen Poe made an appearance in ALVH.

Maybe I love history too much to find any entertainment in this. Would I suggest it? No. I think I'm leaving this for that whole Twilight crowd, those people who are really into vampire stuff right now. Don't worry, we all go through that phase...really...I won't even say how many Anne Rice books I read as a teenager.
Abraham Lincoln Abraham Lincoln Vampire Hunter book reviews

Victoria said…
Oh my goodness, books like these exist!?!? And I hear ya about the vampire phase thing, mine was in 8th grade. Besides watching Buffy, I have never gone back since!
February 11, 2012 at 8:41 AM

Anonymous said…
Hey just ran across your blog by hitting "next blog" it is wonderful. I am from Ohio too - live down in Cincinnati. I will surely be coming back!

You might enjoy it, some of my coworkers did. It was just a little too far fetched for me. :)

Wendy Link Designs said…
Hi!..I just started my own blog and am happy to come across yours. I was undecided about this book and think I'll skip it. Thanks for the review!..I'll be looking forward to your review on the Secret Life of Emily Dickinson...
Wendy
February 13, 2012 at 1:10 PM

Faith said…
I really, really liked this book and suggested it to many friends and patrons here at INDE. Oh, well, to each her own. I do enjoy keeping up with your goings on. We all miss you.
February 13, 2012 at 7:35 PM

Monster Librarian said…
Thanks Wendy! I will make sure I review the Emily Dickinson book as soon as I finish it.